Has anyone seen our needful thing?
I had it a moment ago
It was about such an such a size
Wrought of a unique- yet nondescript nomenclature

We left it precisely where I can’t remember
By the place bereft of details and specifics
How it came to we- my own, escapes us
As I’ve raised no ire, or spoke of its acclaim

It was right at the tip of my thought
As typically called to mind in use or function
Or applicable task, let alone how its purpose,
Might give air to shadows, or things unseen

However misremembered, or misplaced
In whatever cause, chance- or enigma so privy
Pray tell us the current state or whereabouts
Of my fondest accoutrement

Readily discernible to those of the consument eye
With an air that’s undeniable
The make of which I’m at a loss to define
Save its diminutive size, (which belies its value).

Nevertheless, none so desired than that which is lost
No costlier a gem than the one earnestly sought
For such is this heirloom, our immortal amour-
My own, my love- my precious... 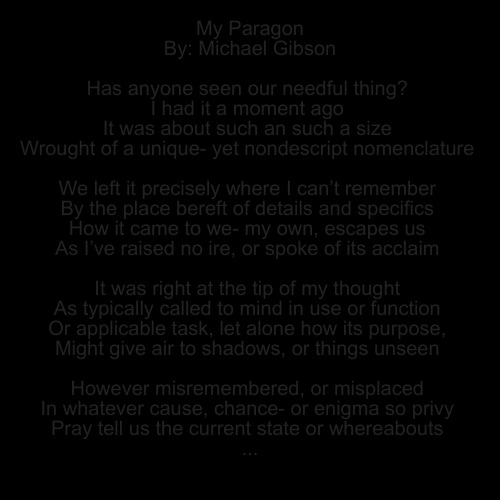