I know not its significance
Yet, sadness is in my mind ...
There's a fairy tail from times past
Its message left behind.

The air is cool as light recedes
And calmly flows the Rhine;
The peak of a nearby mountain glows
In the diurnal Sun's decline.

Above a chaste woman sits
Radiant and quite unaware;
With golden jewelry flashing
She combs her golden hair.

She strokes it with a glittering comb,
As she toils a song's befalling.
A song of torment, a song of woe
With a melody enthralling.

Her song is heard by the boatmen near
Who are seized with grief and pain
And tho' there are dangerous rocks nearby
To her visage and song they strain.

So, the boat is lost and the boatmen, too
Engulfed as the shores came nigh
By the beautiful face and enticing refrain,
The song of the Lorelei. 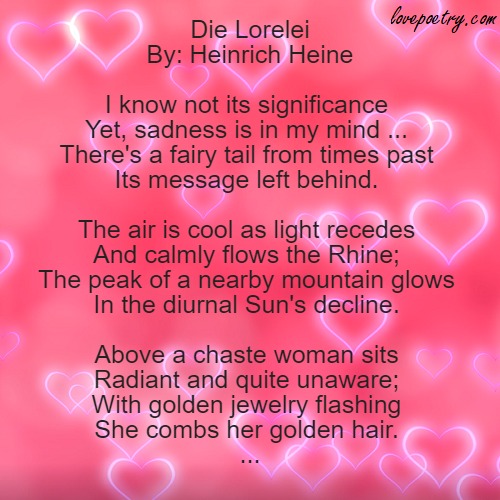