In Defiance of the Sun

The sun came down
and said unto the earth,
"Let me sleep not
beyond your horizon
for I have seen beauty's apex
and it must be everlasting."
But the earth revolved, not obliging
the sun's request,
oblivious to the
rapture of perfection.

And the moon came down upon the earth,
having heard of the sun's obsession.
"Where is this beauty that I must see?
It cannot be such that breaks the silence of the sun."
Though it was such beauty.
Stunning and captivating like none the moon had seen.
Though, this vixen was not for touch nor taking.
She was a human and taken for life to a man.

So furious were the celestial beings at the avarice of this man
that a jealous war was waged.
The sun and the moon wrought damnation on the man.
Still he fought for this woman.
Seven days, then seven more the heavens screamed their envy,
but it was not enough.
The sun and moon knew nothing of love, only desire.
Such was the love between this man and this woman
that even the heavens could not destroy.

Now, for eternity, the moon hovers in tribute to this love
and the sun rises in honor of this woman. 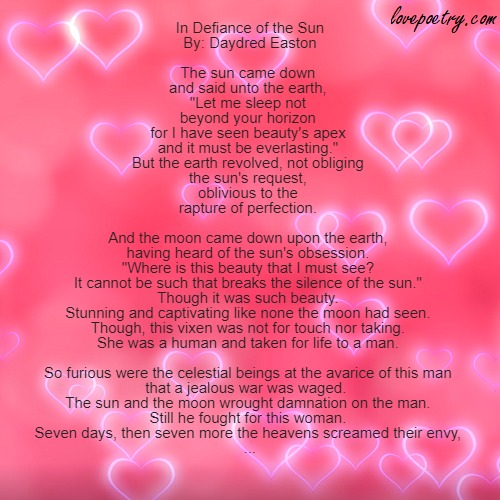